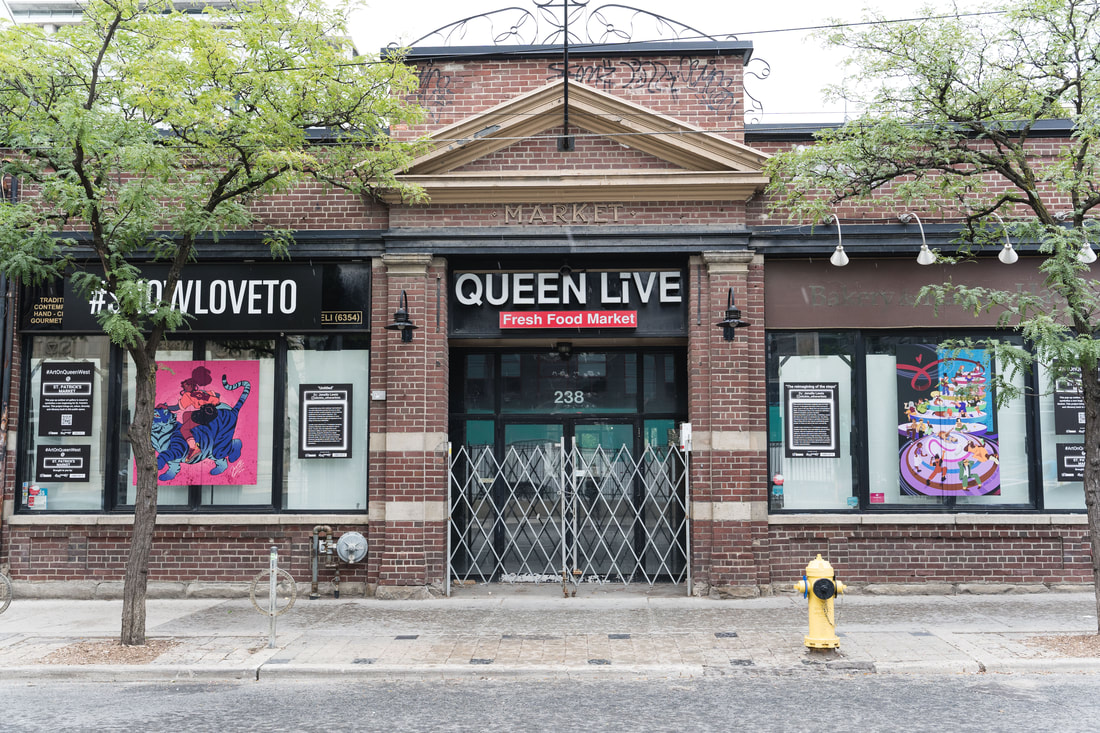 Art, diversity, multiculturalism and community are some of the major elements that make Toronto special. The year of 2021, Year of Public Art, has been dedicated as the kick-off year for the City’s new 10-Year of Public Art Strategy  signalling Toronto’s renewed commitment to public art.

A unique opportunity was presented to the Queen Street West BIA by #ShowLoveTO to get involved to breathe some new life into St Patrick's Market. This city-owned building has been vacant for a few years and in previous years has been home to a rotating number of various businesses. While the inside of the building still needs some remediation before it can host a new tenant, the outside of the building lends itself to being a canvas for an art project with its plethora of windows, and 360 degree access.
​
Who is Involved?Why is this Project Important

Covid-19 has posed some incredible challenges that we never anticipated last year and this carries forward into 2021. We are extremely limited in what we can host or produce while maintaining proper health and safety protocols.

The artist community has lost opportunity to exhibit and showcase their talents and crafts. This project provides an outlet to highlight some of the amazing artists, with a commitment to a minimum of 50% of the artist opportunities to be awarded to  BIPOC identifying individuals.

(listed in alphabetical order)
Alejandra Paton
Alejandra Paton is a Latinx-Canadian artist currently based in Toronto where she earned a BDes in Illustration from OCAD University and a Graduate Certificate in Arts Administration & Cultural Management from Humber College.

Alejandra’s experience living between two cultures is inextricably linked to her work. She has explored themes of biodiversity, cultural futures, and the political and social history of Latin America, Canada and other colonised nations.
Andrew Patterson
Queen West is the creative artery of Toronto. Years ago it was the place to be for us downtown. Style in Progress, 416, Manifesto - MuchMusic, The Big Bop, Bovine, Speaker’s Corner, the MMVA’s getting the block rocking – trawling the record shops from Kops to Rotate This, geeking out at Silver Snail, and doing 100% of our clothing purchases between Black Market and Bellwoods. Getting pizza at this very market! And while many of these places have moved (some just further west), Queen still has that same energy that brings people together through music, food and culture.
Curtia Wright
Born in Scarborough, Ontario. Curtia Wright is a multi-disciplinary fine artist, mural artist and arts educator based in Toronto, Ontario. Her artwork re-imagines our reality using elements of fantasy and surrealism. Using bold and vibrant colour, she aims to transport audiences to her alternate worlds. Wright's murals commonly depict abstract figures surrounded by floral patterned elements. Wright's work is often autobiographical and inspired by pop-culture, Caribbean mythology & folklore. This piece was an ode to giving Black Women their flowers while we're here. ​
Jenelle Lewis
June Kim
I am Toronto based, Korean born painter, street artist. I like to create artwork inspired by Korean folk arts and pop culture, using bold colourful patterns and playful characters. 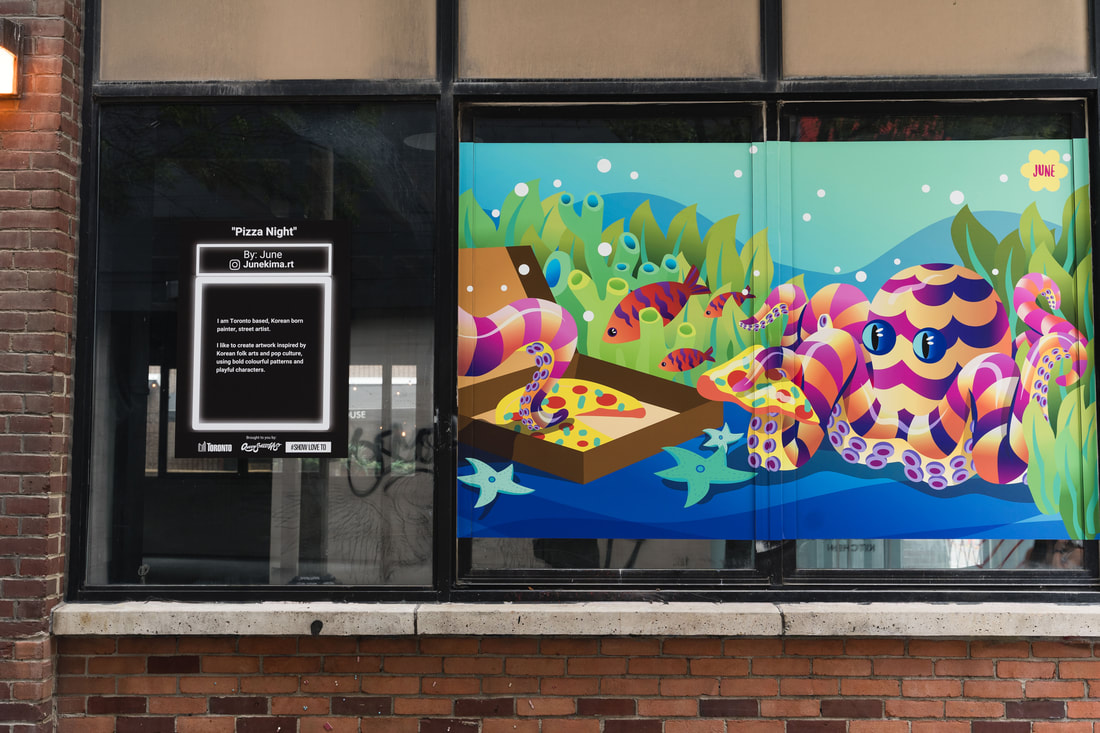 Joseph Bonsu
My name is Joseph Osei Bonsu. I am an illustrator/co-creator behind Heroes Of The World (HOTW). Along with illustrator/co-creator and friend Mark Williams, we've created the flagship hero of HOTW, Oreh Gaia. This piece was originally a post on the Heroes Of The World Instagram page, posted in January of 2021. This piece displays the joyfulness and vibrance of Oreh Gaia as he soars through the air, owning his powers. Oreh is a 12-year old hero-in-training who travels the world, fighting the forces of evil with help from heroes from around the globe. His abilities involve flight, super strength, the ability to create a force-field called The Ozone Shield, and harnessing the five elements - Earth, Wind, Fire, Water, and Light!
Peru
​Peru143 is an internationally recognized Peruvian-Canadian muralist, graphic & installation artist whose practice is informed by digital and traditional art forms and his 25 years of painting graffiti. Rooted in Positivism, Peru’s work aims to heal and uplift people’s spirits by transforming neglected and often oppressive spaces into safe, playful, and imaginative worlds. Peru’s professional career spans across the globe with murals throughout the Americas, Europe and Asia but began in Canada where he’s worked with clients such as Facebook, Nike, Adidas, Cirque du Soleil, Bell, Maple Leaf Sports & the Montreal Museum of Fine Arts.