Springboarding from the Phase 1 efforts towards a more welcoming and compelling public realm, Phase 2 of the Queen Street West Streetscape Revitalization is in construction this Summer into Fall 2021. As part of a larger City of Toronto initiative, the project will include a landmark sculpture, heritage interpretive features, custom site furniture, and a sidewalk mural. ​

Background and Scope of Work

In 2019, the City released an RFP to solicit a Landscape Architectural Team of Consultants to lead the Phase 2 works from Spadina Avenue to Simcoe Street. PMA Landscape Architects was selected as the prime consultant, with a fulsome team of specialists including artists Scott Eunson and Jyhling Lee (figureground studio), structural engineer Blackwell Engineers, and electrical consultant MJS Consultants. As part of a separate Request for Proposals, artists Catherine Tammaro and Mairi Brascoupé were selected to incorporate Indigenous placekeeping installations.

The overall scope of work included the conceptual design through to construction documentation and construction management support of streetscape features. This design process included workshops and meetings with selected members of the BIA Board, as well as presentations to the Board – to review and vet design proposals. The design process occurred from February of 2020 to March of 2021 with regular monthly to bi-monthly meetings.

Similar to the Phase 1 project, the project goals from the outset were about several key ambitions:
•     Placemaking – celebrating the street’s character with artistic and functional interventions, referencing cultural heritage
•     Site-Wide Public Art – continuing to support and implement public art by multiple local artists and celebrate Queen West’s eccentric identity of being “the same, but different”
•     Extending the Public Realm – create interventions that are engaging and encourage curiosity, lingering and interaction; physically expand the public realm where possible via sidewalk expansions and “bumpouts”; maximize pedestrian flow and circulation
•     Highlight Neighbourhood Connections – enhance physical and visual connections both north-south and east-west beyond, to draw people to Queen West

Through the facilitation process the vision and approach to the streetscape design were refined to the following Vision Statements:
• Hear and be Heard
• See and be Seen
• Recognize the Past and Grow in the Present
All further design development and solutions would be measured against these vision statements and goals.

A collection of public art and custom furnishings were developed that would have one or all of these characterizing qualities: Eclectic, Surprising, Reflective, Resilient and Flexible.  The features would have a robustness and durability that would minimize ongoing maintenance, but also serve as artful engaging placemakers and landmarks along Queen Street West.
The following features were developed as part of the project: 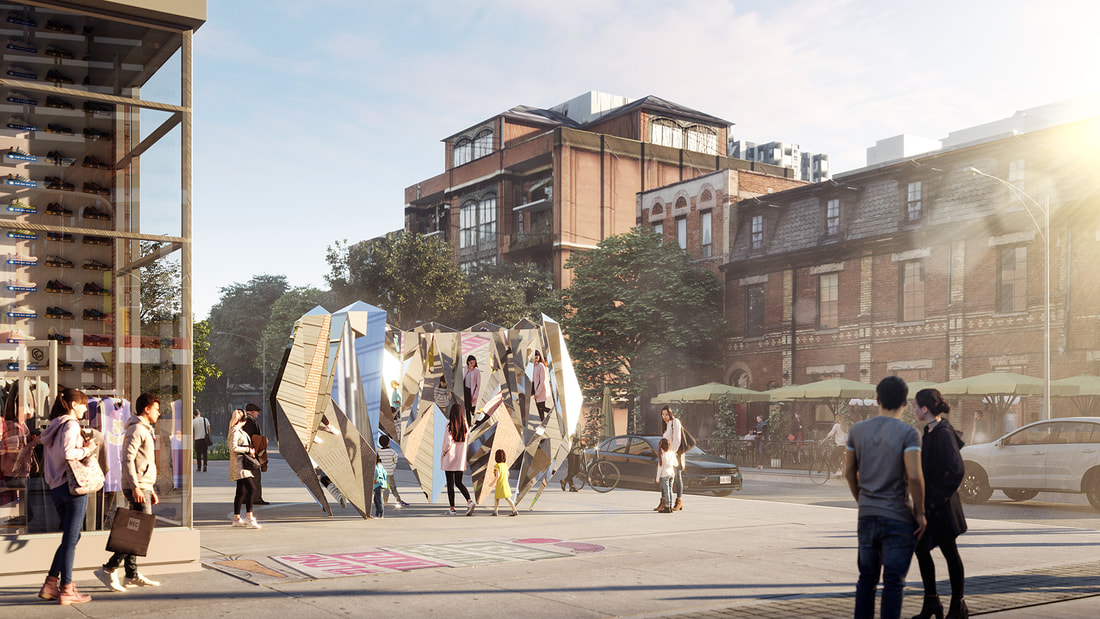 As a response to the Vision Statement of being able to 'see and be seen', artist Jyhling Lee developed a significant landmark sculpture that will reside at the northwest corner of Queen Street West and Soho Street, adjacent to the current MEC building.  It is a sculpture and inhabitable environment that amplifies the energy and dynamism of this stretch of Queen Street West as a place to see and be seen. The artwork captures and kaleidoscopically reflects this ever-changing environment both around and within its faceted mirror form. 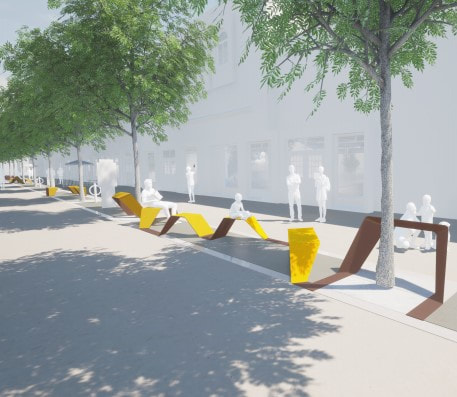 PMA developed a series of custom flexible seating that would provide short perching, comfortable accessible seating and socializing in small groups. This ‘ribbon’ of furnishings would reference some of the angular geometries from the sculpture but also instill some colour and functional seating in the wider sidewalk block from Spadina Avenue to Soho Street. ​

Continuing from Phase 1, artist Scott Eunson developed an updated and contextually appropriate design for the tree guards that draw inspiration and reference the heritage architecture cues of the store facades interpreting them into an abstracted cityscape that would wrap around the base of existing trees. ​ 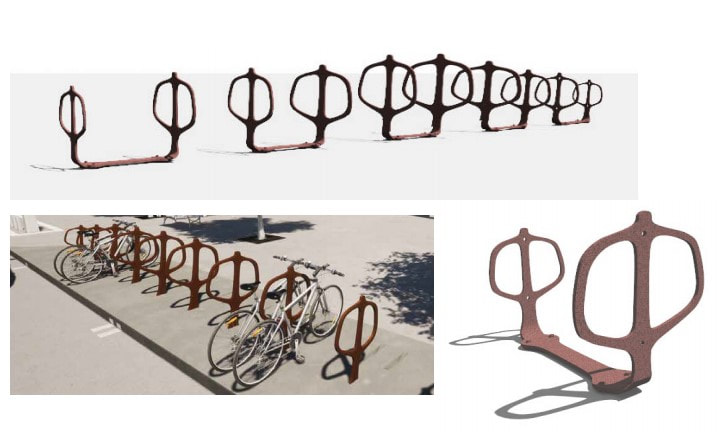 As part of the City and BIA’s support of cycling in the City, an expanded sidewalk close to the Soho Street intersection is going to form the base of a new bike corral composed of a series of 10 custom bike rings designed by artist Scott Eunson.

To continue and complete the heritage mapping started in the Phase 1 project, artist Scott Eunson has designed a series of bronze inlays that will be demonstrative of early colonial habitation taken from a map from 1827. ​

Wyandot artist Catherine Tammaro was selected to design interpretive artful features that would reflect the continual presence of Indigenous Peoples on this land. She is working in consultation with community members, to design what she refers to as “Energetic Signatures” or "Clan Markers" which are culturally resonant signs of Indigenous Peoples' kinship groups. The Markers will become “powerful connecting points for our beautiful reciprocity with the Natural World...” located rhythmically, close to Mother Earth, they reflect "sound songs", throughout. She will present symbols from each of the clans of the Wendat, the Haudenosaunee and the Anishinaabeg, and kinship markers for Cree and Métis Peoples. Catherine has said she is deeply honoured to be doing this sacred work.​

Anishinabeg artist Mairi Brascoupé was selected to prepare the design for the sidewalk mural. The site is within the northern sidewalk stretch east of Soho Street, continuing the legacy of the popular sidewalk mural installations that has existed on Queen Street West for decades. Her work subject matter focuses on land and place, plants that are related to the territory, mapping of important waterways and other expressions of Indigenous placekeeping.
The final result is a curated collection of public art and custom furniture that seeks to continue Queen West’s legacy as a culturally rich, artful and engaging place to be, to accelerate growth in the area and contribute to much needed public realm respite and socializing.

The QSWBIA hopes you all
stay healthy and safe! 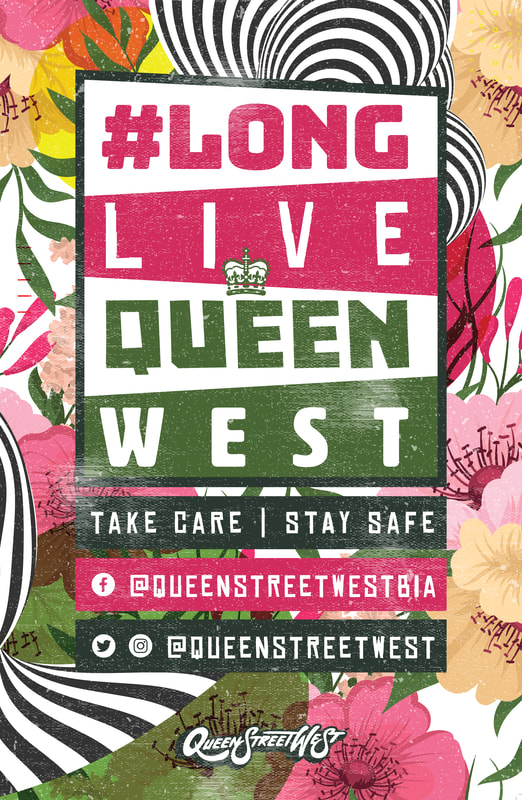